8th January Joint BiE and the3million meeting with Hilary Benn, MP and chair of the Brexit Select Committee in the House of Commons.

18th January BiE and the3million sent a letter to Donald Tusk, President of the European Council. 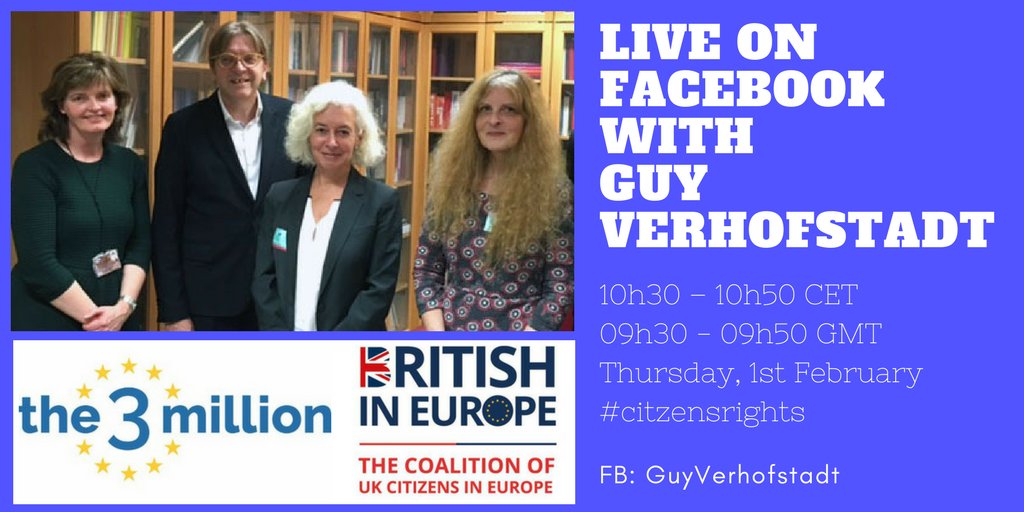 8th February The advocacy team visited Westminster to meet with Hilary Benn MP and Duma Langton of the Exiting EU Committee.  Later they met with the office of Shadow Brexit Minister for citizens’ rights and the Shadow Immigration Minister.

22nd and 23rd February Back to Westminster for meetings with DExEU Citizens’ Rights Team, the clerk to the Exiting the EU Committee ending with a Meeting with Keir Starmer MP

12th April BiE sent detailed suggestions and questions on the draft of the Withdrawal Agreement to DExEU and the European Commission Article 50 Task Force.

16th April We attended a hearing on Citizens’ rights in the Dutch Parliament.

18th April Meeting in Paris with the French Interior Ministry’s department dealing with registration of foreigners and residence permits.

24th April We attended a hearing of the  Brexit Steering Group in Brussels.

1st May Letter sent to David Davis, Brexit Secretary, about the importance of freedom of movement.

4th and 5th June We organised a Joint advocacy day with the3million at the European Parliament in Brussels.
We met with  the Article 50 Task Force and Guy Verhofstadt. We had other meetings with Barbara Spinelli (GUE/NGL), Roberto Gualtieri (S&D), Jean Lambert and Philppe Lamberts (Greens), Udo Bullmann (S&D), Claude Moraes (S&D), German Permanent Representation Brussels. Finally we met with the office of the European Ombudsman Brexit team.

6th June  Members of our Steering Team gave evidence Exiting the EU Committee prior to providing oral evidence on 6 June 2018. We also submitted written evidence prior to the hearing.

12th June We gave evidence at the EU Justice Sub-Committee of the House of Lords.

23rd August Jane Golding gives speech at British Embassy in Berlin expressing the worry and frustration of Britons in the EU and our increasing concerns about a no-deal scenario. She repeated British in Europe’s demands for an improved and ring-fenced agreement on citizens’ rights.

4th September Joint letter with the3million sent to both negotiating teams about the impact of no deal.

11th September Meeting with Hilary Benn, MP and chair of the Brexit Select Committee in the House of Commons, with the3million.

9th and 10th October With the3million, the BiE team held a ‘Mini Lobby’ in Brussels over two packed days.  We met with MEPs from the Green and the S&D groups  Claude Moraes, Gillian More a TCN status expert and the Italian and Irish Permanent Representation.  We met the Article 50 Task Force again and various officials including the Chef de Cabinet of Guy Verhofstadt’s office.  In addition we held a drop-in session for MEPs on Citizen’s Rights and held the ‘In Limbo Event’.

20th October  The BiE Co-Chairs and members of the BiE Steering Group attended the People’s Vote march in Westminster.

22nd October Jeremy Morgan meets with members of The 5 Star Movement, together with the the3million to address the rights of British citizens in Italy and Italian citizens in the UK after Brexit.

8th – 22nd November A series of meetings were held in SW France by Kathryn Dobson to inform local British nationals.

21st November Letter sent to Theresa May by BiE.

28th November Jane Golding participated in a  Panel discussion on Votes for Life at Sussex University.

29th November  BiE Steering Group members Kalba Meadows, Christopher Chantrey and Kathryn Dobson met Deputée Alexandre Holroyd to input into the French Projet de Loi.  They went on to  meet with the British Embassy, Paris and the French Ministry of the Interior.

5th December BiE and the3million attended the Committee on European Affairs, House of Representatives, the Netherlands, and participated in a roundtable discussion on Brexit.

20th December British in Italy had a meeting with the civil servants in the ItalianForeign Affairs ministry responsible for citizens’ rights.

The coalition of UK citizens in Europe